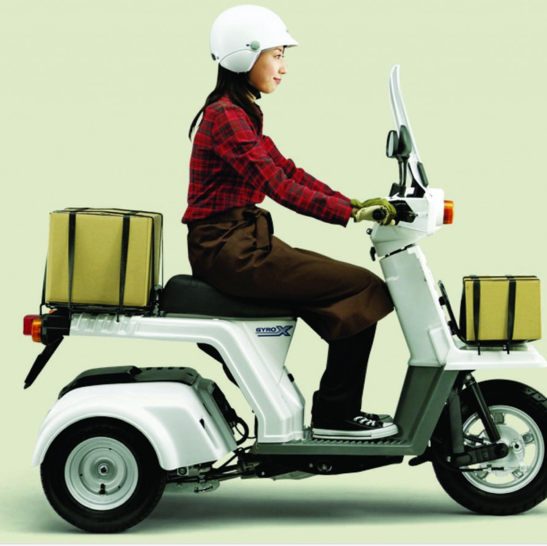 EU data has proven that if only 10% of car drivers cycled instead, then traffic congestion could be reduced by up to 40% for all road users in general. Another figure has mentioned that if that 10% could rise to 25% then congestion would become a thing of the past altogether. This in turn would free up roads for dedicated cycle lanes and improved safety. A vehicle that addresses the total ‘user experience’ would gain acceptance, not just from existing commuter cyclists, but the lapsed, cautious and uninitiated too. And this could benefit other road users too.

The classic double-triangle diamond bicycle frame has been with us since James Starley invented it in 1877. Apart from some notable exceptions – such as Alex Moulton’s pioneering 1962 F-frame bicycle with suspension and tough little wheels – there has been little significant change to the basic layout, but plenty of incremental innovation in fabrication methods, materials and fittings. Even the three-speed Sturmey-Archer epicyclical gear hub has changed little over the last 80 years. Although beautiful to some eyes, bicycles today can look like a mismatched assortment of components bolted together, rather than a cohesive piece of integrated modern design.

Most aspects of the user experience of riding a bicycle haven’t changed much either: weather, safety and theft are still major issues, they need frequent maintenance and can’t take much in the way of baggage. On the plus side, you can accurately estimate your journey time, they are relatively inexpensive to run, environmentally sustainable and they give us the exercise that modern lifestyles seem to deprive us from.

Maybe, though, some people want the convenience of cycling, but also a safer, easy, everyday user experience rather than setting out to becoming a hardcore cycling enthusiast. Cycling in cities is particularly troublesome due to the hazards of dense traffic, its stop-start nature and seemingly rampant theft.

Like many I started my student days on a moped; this was a classic French petrol motor-assist front-wheel drive Velox Solex, and front wheel drive bikes are lethal in the wet. You would need to pedal away from lights to start, up hills and cruise with the engine, which is rather the reverse of how a modern electric-assist bike works where you use the additional electric power to get up to speed and up hills, and cruise with human pedal power.

Now that technology is better able to deliver us lightweight long-lasting batteries, electric-assist bicycles are becoming more interesting. Admittedly, until I tried the superb Gocycle for a while, I didn’t entirely see the point of them, as I felt the exercise of cycling to be something positive. However, my summer commute of 14 miles from North Kensington to Tower Bridge and back was much improved, especially the last half mile up the Ladbroke Grove hills. However, I resorted to my cosy Vespa with granny-skirt for those dark, cold dark winter journeys.

Tricycles have been with us for almost as long as the bicycle, but the extra-effort in dragging around the third wheel, cumbersome cornering and their physical size has always relegated them to second-class cyclists who could not cope with two wheels, or used for carting goods around large factories.

The case for a handlebar-wide narrow-gauge tricycle was first made with the 1960s Ariel 3 moped, which had a frame that tilted while cornering and some weather protection; and the more refined Honda Gyro, which used similar technology in 1980s Japan. They were both petrol driven, which increased weight, used up luggage space and needed a driving licence.

The last person of note to try this commercially was Clive Sinclair with his very innovative, but under-engineered and much derided, C5 tricycle design of 30 years ago. Crucially, he had tried to overcome the inherent cornering issue with a low centre of gravity, which put the recumbent cyclist at exhaust height, hidden from the sight of other motorists with little view of the road ahead in traffic.

Maybe this was an idea too soon, like the similarly doomed Apple Newton of the same era. But what if we were now to address many of the issues of the C5 with modern materials, iPad battery technology and a more sensible eye height? Shall we one day see the C5 as the precursor of something new and ground-breaking in vehicle design? It would need to be practical and look desirable, maybe something completely new and aspirational. A very well thought out, visually clean and integrated piece of design that is versatile and easy to live with in most conditions. A vehicle that addresses the total user experience would gain acceptance, not just from existing commuter cyclists, but the lapsed, the cautious and the uninitiated too.

Security
• Integrated electronic locking system
with battery drive electronics
• Easily removable compact battery
that can be charged indoors
• Traceability with in-built GPS – ‘find my bike’
• Frame on each bike has number embossed in,
like number plates

Safety
• Integrated lights, horn and bar-end indicators – modern LEDs use 10 percent of the power of tungsten lights
• Highly visible with LED lights at extremities
• Self-adjusting brakes that work well in wet
and not prone to fade
• Reflective bodywork

Effort
• Part of riding a bicycle is getting exercise, however distance, hills and luggage present a challenge, especially to the old and less fit
• Electrical power assistance from standstill up hills and with large loads
• ‘Automatic’ adaptive gearbox
• Lightweight easily removed battery
• Can be ridden when uncharged

As congested traffic fumes tends to pollute more than moving vehicles, if the EU research and analysis are correct and a significant number of four wheelers can be lured on to two or three, then the consequential effect on both road safety and air quality might turn out to be quite significant.