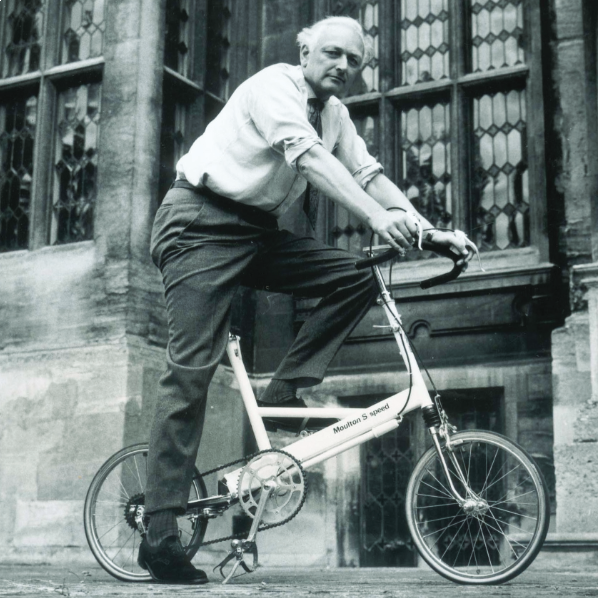 The Moulton Bicycle was a real innovation when it was first launched in the Sixties. Compact, speedy and with a style all its own, it’s still a hit 50 years on

Joanna and I had the opportunity to visit Moulton HQ, so we jumped in the car with our camera and sped down the M4. Tucked away in rural Bradford on Avon, a town in west Wiltshire with a population of 9,500, Moulton is one of the last remaining British bicycle manufacturers, its products are still hand-built and exported around the world.

Sir Alex Moulton had passed away in December 2012 aged 96, so we were too late to meet the legend himself. The Moulton residence is called The Hall, a towering Jacobean stately home built in 1620, which has been the home of the Moulton family since 1846 and was the site of the original Moulton factory in 1962.

We ambled towards reception, taking in the picturesque scenery and the warm honey colour of the Bath Stone buildings, looking down on the courtyard is a frieze of Britain’s most successful professional cyclists Tom Simpson racing his Speed.

After our meet and greet, Dan Farrell , Group Technical Director, led us through a blue door where the Moulton team were busy at work engineering their quota of impressive Moulton bicycles. Tim Bigwood started at Moulton in 1962 as the tool and jig maker and has worked on every Moulton bicycle. And to this day, the Moulton factory sits in the former stable on the same property where it all began.

Stephen Moulton came to Bradford on Avon In 1848. Steven was a friend of American Charles Goodyear, who invented the vulcanization of rubber, making it much more durable, and leading to new uses for the material such as rain capes for British soldiers fighting the Crimean War. When Stephen Moulton bought The Hall, formerly known as ‘Kingston House’, he set up a large rubber manufacturing works in the old woollen mills, and supplied springs and hoses to railways around the world. The Company ‘George Spencer Moulton & Co’ became a large stock quoted firm and later sold to the Avon Rubber Company in 1956.

Sir Alex Moulton wanted to develop something for the automotive industry focusing on the design and development of rubber suspension for vehicles such as cars and trailers. He met British automobile designer Sir Alec Issigonis who created the Mini and the Morris Minor, this culminated in the development of his acclaimed suspension systems for the Mini, as well as the Austin Allegro, Princess, Metro and Ambassadors.

Sir Alex unveiled the Moulton Bicycle at the Earls court bicycle show in 1962 and was overwhelmed by the reaction it received. Within a year Moulton Bicycles was the second largest bicycle manufacturer in the UK and its models were produced at a rate of 1200-1500 bicycles a week by 1963. Not only was the design revolutionary, the construction was also made much more like a car than with a traditional braised and lugged cycle. You would have to wait another 20 years to see other bicycles made in the same way.

The Moulton Bicycle is the original full-suspension, separable, small- wheeled, high performance bicycle, world renowned for speed, efficiency, durability and comfort. Expertly engineered for over 50 years and handcrafted in England, these bicycles are the world’s most efficient form of transport – designed for universal use, real performance and comfort. Moulton bikes have won time trials, track events and road races and hold the unassisted land speed record of over 50mph.

Thank you to Dan Farrell, GroupTechnical Director at Moulton Bicycles.