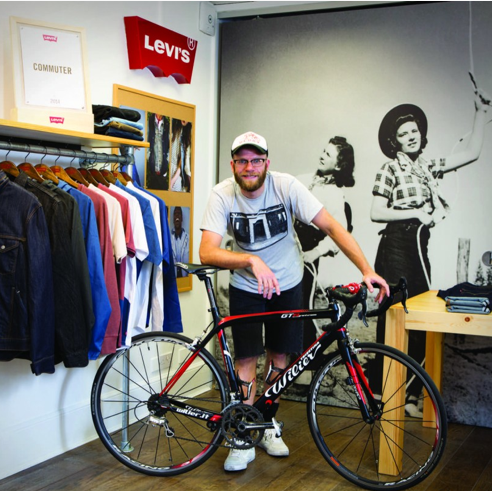 Levi’s Commuter jeans are designed to take the urban worker from their morning ride, through the workday and into evening. Levi’s Account Specialist Phil Brown talks us through the cut of his cloth, and what makes Levi’s a perfect fit for the cyclist…

Performance, functionality and safety – three words you might normally see applied to the latest innovative bike. But here they’re being used to describe a pair of jeans from probably the world’s most famous purveyor of denim: Levi’s.

“Commuter is one of our most successful innovations and is the perfect example of how functionality, performance and style go hand in hand,” says Phil Brown, Levi’s very own jean genie. Phil describes himself as an old hand, having worked for Levi’s Red Tab division and at Levi’s European headquarters in Brussels. He was also a key player when the Commuter range Spring/Summer 2012 was launched in Europe. So who better to fill us in on how the commuting cyclist should be dressing.

“Cycling has always been my hobby and passion so this job is the perfect fit for me, if you’ll forgive the pun,” Phil says. The new collection sees advancements in fabric, seasonal colours and utility. For example, Levi’s Commuter jeans feature a reinforced seat, pockets and belt loops and, very usefully, are water and dirt repellant. They’ve also been manufactured using performance stretch twill for comfort and mobility, plus antimicrobial technology for protection against odours. In terms of safety, the garments feature reflective tape on side seams, while the tops offer stand-up collars with a hood, which folds into a zipper compartment.

“We originally launched our Commuter range for men because we knew this was the biggest opportunity,” Phil reveals. “Many cyclists were already wearing Levi’s jeans, in particular our popular 511 slim fit, so it was about offering them something more that was bespoke to their unique set of needs. Adding in the performance element to the product is what makes the Commuter line very special. We use 3M reflectivity stitching, which is stitched on the outer seem and other parts of the jeans. Brighter than a million candles, this appears on all our trousers and some of our tops and shirts.”

As Phil notes, a degree of stretch in the denim is very important so cyclists can move freely. To achieve this they have used an elastic polyurethane material used for close-fitting clothing, blended into the product. “From my experience the first area to wear thin on your trousers will be the crotch area. We originally had the padded seat area in our Commuter jeans to give the rider extra comfort. The great thing about the Commuter collection is that it’s designed, worn and sold by cyclists.”

The jean bottoms are also slightly higher at the back to conceal the backside of the rider when cycling. They reveal a reflective hem when the jeans are rolled up, along with a D-lock holder on the back waistband that allows the cyclist to attach their lock at the back rather than use pockets.

From jeans to jackets, Levi’s has it covered
The brand’s iconic Trucker jacket for commuters again has the 3M reflectivity plus snapper buttons. So, if you need to open the jacket while riding, the advantage is that it snaps open quickly with one hand. Additionally, the Trucker has a concealed waterproof hood that is very thin, which allows cyclists to wear it underneath their helmet. The jacket is longer at the back to conceal the backside when reaching forward, and the cuffs are structured the same way to prevent the sleeve rising.

Phil notes that all of Levi’s tops have an effective fibre-based moisture-management system – used quite a lot in the sports industry and particularly on cycling jerseys. “We are not a cycling brand, but what Levi’s Commuter range offers is a great cycling performance product. Most importantly we have also stayed true to our roots; the consumer can relate to Levi’s iconic brand.”

Expect to pay around £80 for a pair of 511s, 504s or 508s, of which the slim fit 511 is said to be the most popular and so is carried through each season. The 504 suits cyclists who have a larger frame because they cycle a lot, and have bigger thighs and bottoms with slimmer waists.

The Chino slim fit (£80) will be part of Levi’s City collection, which is aimed at cyclists who commute less, or use the London bike hire scheme and want to wear a slim functional jean with a nice jacket to the office. Trucker jackets are priced at around £170, with the non-denim Trucker at £155.

Not just for the male commuter…
Levi’s also launched a women’s Commuter range recently.
Also new from Levi’s are rucksacks and messenger bags. In short, it appears that the modern Levi’s is about more than trousers – whoever is wearing them.