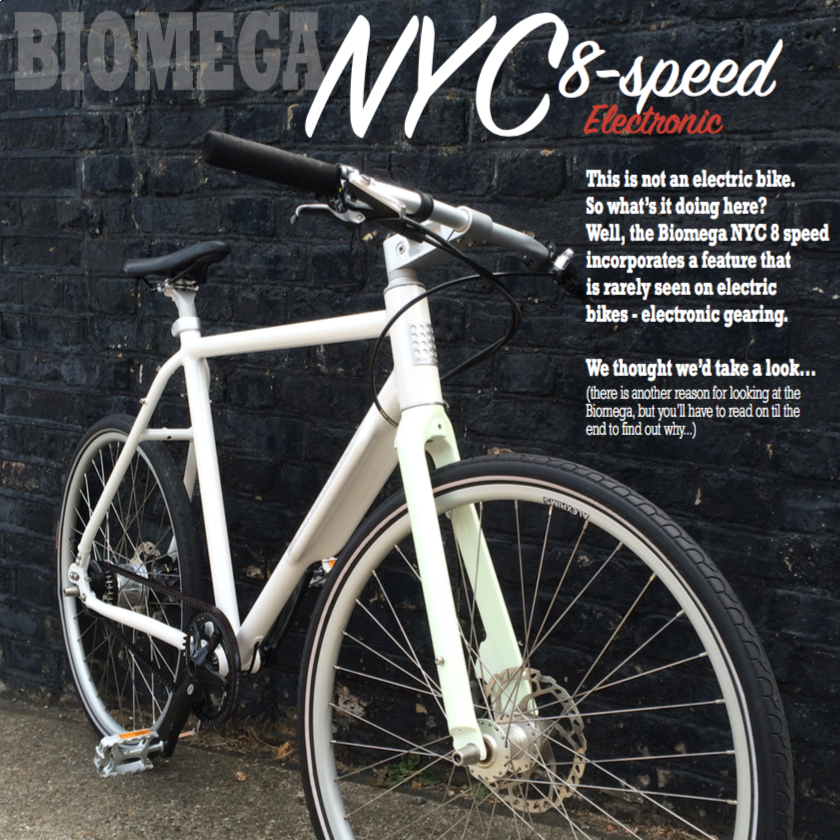 This is not an electric bike. So what’s it doing here? Well, the Biomega NYC 8 speed incorporates a feature that is rarely seen on electric bikes - electronic gearing. We thought we’d take a look... (there is another reason for looking at the Biomega, but you’ll have to read on til the end to find out why...)

Electronic gearing has been increasingly common on race bikes over the last decade. Advantages include having all gear-shifting contained on one side and requiring minimal effort with a touch of your thumb. If the battery runs out though, you’ll find yourself stuck in the same gear. This is unlikely however, as the charge should last many days, so you’d have to be a bit careless for it to happen (Shimano state the Di2 battery lasts from between 600 to 1,500 miles between charges, with 1,000 miles an average).

Biomega is a premium urban bicycle brand, founded in 1998 and dis- tributing their products to more than twenty countries, from their base in Denmark. Their original design ethic was driven by a desire to not use existing bike designers, with every attempt made to avoid convention. The Biomega NYC’s key visual cue is a hydro-formed down tube, thus integrating the front mudguard function into the bike as a stylish characteristic. Another key style point are the Nightglow effect front forks, although it’s fair to say they’re not going to let you get away with not having a light.

The smooth, quiet carbon fibre belt drive is a perfect partner to the Shimano Alfine Di2 internal electronic shifting system. Launched a couple of years ago, the 8-speed set-up is sharp, smooth, and fast. Seeing as the Di2 was designed for city bikes, it doesn’t require a rocket scientist to see the potential for touring electric bikes. One more wire placed down the tube won’t be a problem, and many e-bikes now feature carbon fibre drives.

The battery is in the bottom of the seatpost, with the display on the handlebars functions as a soft- ware controller, display and gear shifter, sending the signal to the hub. If you don’t know where the charge-point is, you might find it hard to locate - I spent ages searching for it, and it’s the tiniest cover underneath the display. It seems to charge from low to full within a few hours.

The gentlest tap on the trigger is followed by an electronic buzz and the hub moves quickly from gear to gear. With no front derailleur, shift- ing is a simple one-finger affair. Other than the Biomega frame, forks, handlebars, stem and sad- dle, there are Shimano hydraulic disc brakes, 26x1,25 tyres with re- flective strips, and it comes in 45cm, 50cm and 55cm.

The Biomega NYC 8-speed is a light, nippy bike that is perfect for city-riding (it’s stylish looks would be an attraction in an office, rather than something to hide under the stairs), and it can handle bumpy sections of road surprisingly well. Danish collaborators KiBiSi de- signed the New York / NYC shown here, as well as the Tokyo / OKO, which is currently being re- designed as an electric bike for a late 2015 release. The current OKO design concept is pictured below. Now I wonder where the battery might go on that slender frame? Perhaps between the seat tube and rear mudguard, above the pedals? Or could it be hidden in the frame somewhere? We’ll find out within the next six months when we review the Biomega electric bike...