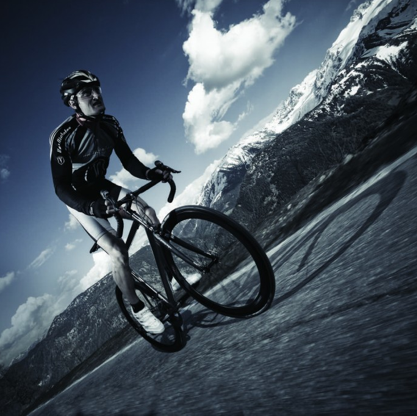 Jay from Velorution talks us through the advantages offered by Van Nicholas bikes, including how their titanium construction beats aluminium and carbon fibre…

Van Nicholas represents great value for money; yes, there are other companies offering titanium, but these guys are offering a premium product at a nicer price. The passion that has gone into their construction is evident throughout and extends to how the tubes
are welded.

“You can buy a frame that was welded in the US and immediately you pay a premium for it, whereas Van Nicholas use an excellent boutique welding company based in China – the saving is passed on to the customer. Chinese manufacture might bring with it certain connotations, but in fact they have some of the most skilled welders in the business. It’s notoriously hard to weld these tube sets and they have proven to be better quality that those produced in the States or the UK. It’s about quality, rather than where it’s made.

“The industrial yet refined design of the Van Nicholas bike frames is very slick, complete with cool graphics and a timeless design. With an acclaimed heritage, the company makes bikes for all disciplines. Displaying clear faith in its product, Van Nicholas also offers something no one else does: a lifetime guarantee on all its frames, plus a discount on a new frame if you damage it yourself, which is a very cool ‘extra’.”

The titanium advantage
“Titanium is a premium material that possesses the best all-round qualities; if you compare it to aluminium, it’s just as light if not lighter. It’s not as stiff as aluminium, meaning it’s going to give you a much nicer ride. Steel tubes are great – they’re nice, flexible and comfortable – but you have to spend a lot to match the performance of titanium. Plus, steel rusts and corrodes over time. The alternative of carbon is very lightweight but very rigid, and not as compliant as titanium. Titanium has all the good qualities of the other tube sets wrapped up in the one package.

“Any customer has only to enjoy a ride on a titanium bike to discover just why titanium is better than carbon. Buying a titanium bike is like making a long-term investment and buying a piece of art. While carbon is a lot easier to work with for mass production, it can’t maintain the same structural integrity for the same amount of time.”

Astraeus
The Astraeus is the most high-end frame Van Nicholas offers. It has a different top tube, a different head tube and a different back end, yet the frame has a real stiffness. It has a tapered head tube, which is thicker at the bottom section than it is at the top. It also has a bigger interface between the frame and the fork that gives you a much stiffer front end. So, for example, when cornering, where you’re powering out of the saddle, the front end of the bike feels stiff and this allows you to lay the power down on the bike a little better. The frame starts off around the £2,000 mark, though building the complete bike could cost you between £6,000-£8,000 very easily.

Zephyr
The Zephyr is simply a bike for riding all day. Its geometry is a lot more ‘relaxed’. It has a slightly longer head tube, which means the front end of the bike is going to sit higher than most other ranges. The top tube is a little bit shorter, so it gives a more relaxed ride. This is ideal for someone who wants a bike not for touring, but rather riding in comfort all day, knocking out the miles on the road and the occasional sportive. A complete bike starts around £2,400 depending on the specification.

Aquilo
This is one of my favourite bikes, an out-of-the-box race bike. It has internal cable routing and still maintains a 1.5-tapered system plus a good degree of stiffness. The back end is a little bit more compliant than the Astraeus while not being as aggressive, but nonetheless maintains most of its features apart from its squared-off top tube. The frame starts off at £1,200, with complete bikes from £2,500, building up to £6,000 to £8,000 depending on specification.

Chinook
One of the results of choosing titanium is that you get a very comfortable riding frame. This is a bike that you can ride and race all day. The Chinook uses a 1.8-inch head tube so, technically, in the front end it’s not as stiff as the Astreuas or the Aquilo frame. It also uses a conventional 1.8-inch headset. The fork isn’t as wide at the bottom, so you lose a bit of rigidity. The cable routing is external and, while for me it’s not as aesthetically pleasing, this is a great frame at a great price, offering some great geometry. It’s a little more aggressive than the Zephyr. The wider and stiffer back-end with a 3D dropout is the same on all the models except the Ventus. Frames start at £1,100, with complete bikes starting at £2,200 and the final price depending on specification.

Ventus
The Ventus is the entry-level model in the range in terms of price. It has a Shimano 105 with a Tiagra mix or a SRAM apex build. It’s one of our best-selling Van Nicholas bikes because it represents great value for money when pitted against other titanium bikes on the market. It also appeals to ladies, as the sizing starts at 48 for petite ladies. The Ventus has a laser-engraved dropout that is a little bit thinner, offering flexibility in the back end. Someone who is racing on the bike may not appreciate this and I would advise stepping up to a Chinook. Frames start at £970, with complete bikes from £1,599.

Pioneer
This is a heavy-duty touring bike. It uses a 26-inch wheel as apposed to a 700c wheel. The reason is the 26-inch wheel is technically stronger. It runs a slightly wider tyre, which offers comfort and strength when carrying heavy loads. The bike also boasts a heavy duty down tube while still maintaining a lightweight frame. It has full-length mudguards and a full rack system on both the back and the front. It has a Shimano or SRAM system, and is also available in a Rohloff build, which is an internal gear hub system.

Amazon
The Amazon runs an integrated headset and a larger 700c wheel than the Pioneer. This offers a sportier ride running up to a 38ml tyre. It has V brakes as opposed to caliper-style brakes and has a sloping top tube a more compact frame in terms of its build. The Amazon is also available in a ladies’ build with the sloping top tube. Like the Pioneer, the Amazon is available with a derailleur system or Rohloff internal hub. The frame is £1,100, with a complete build for the derailleur system starting at around £2,300. If you opt for the Rohloff hub, then prices start at around £3,400.

Yukon
The Yukon is the lighter-weight brother of the Amazon. It runs a Gates Carbon Drive belt with a Rohloff internal gear hub. A smaller 28-30c tyre offers a sportier ride. This is a slightly lighter bike at the back end, which means it may not hold up to the abuse of the Amazon and the Pioneer. Yet it can be fitted with drop handlebars and a high-end Dura Ace or Ultegra system to create a nice lightweight road bike that is capable of taking mudguards and rear pannier racks.

“There are two types of Van Nicholas customer: one who has read about the bikes online or heard about them and thinks it sounds too good to be true, so comes into the store to check them out first hand; then there is someone who is simply looking for something completely different. We point them in the direction of the Van Nicholas range, put them on the bikes for a test ride and they do the reasoning themselves, because 9 times out of 10 they love it.

A Van Nicholas bike is a bike for life.”